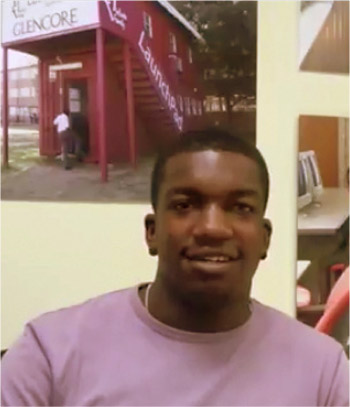 “More Than A Mentor – A Friend, A Father Figure”

Andrew Johns was introduced to Infinite Family while living at Nkosi’s Haven when he was just 13 years old. Nkosi’s Haven is a NGO (non-governmental organization) offering holistic care and support to destitute HIV infected mothers and their children (HIV positive or not). Andrew was matched with his Video Mentor Mitchell Karp in New York. They developed a close relationship over time and Mitchell still plays a vital role in Andrew’s life today, 10 years later.

Andrew describes being a Net Buddy at the age of 13 as fun, but sometimes a lot of responsibility. He would forget his video mentoring appointments occasionally. He struggled at such a young age to really see the true value of having a mentor. But, once they built trust and comfort, Andrew began to see the true value and appreciate the advice he received.  In Andrew’s words,  “He is more than my mentor; he is more like a friend and a father that encourages me to be the person I want to be.”

Andrew says, “Having a mentor helped me see the world in many ways because I was learning about the American way of life and comparing it to my life in South Africa. My mentor would be my English teacher and also I would also learn computer skills while at it. I believe being in the program has played a role in who I am and who I want to become in life.”

Mitchell also played a critical role during several very frustrating years when Andrew wasn’t allowed to attend school until ‘his papers were sorted out.’ He hated spending day after day doing nothing to move forward with his life and the repeated set-backs he faced in getting everything in line to continue.  His frequent discussions with his Mentor helped him learn to control his frustration and to practice patience as well.  As a result, of his persistence and help from the Nkosi’s Haven team, not only was Andrew able to finish his studies – he managed to complete they long list of requirements to attend college in the United States!  He is currently doing very well as a sophomore at St. Michael’s College in Connecticut.

When asked what his mentor has taught him about himself, he answers, “My mentor taught me to get out of my comfort zone and aim higher than I had ever done before. When I was in high school, he would make me write down the grades I thought I would get and at the end of the semester we would review them and see if I achieved my goal. This made me challenge myself because I did not want to let him down and also gave me a chance to be competitive and work towards achieving my goals. Without Mitchell, I would have done what I thought was good enough.  Today, I believe I can do anything I want because of my Mentor.”

If he could tell anything to his 12-year old self, it would be to “stay involved in Infinite Family, keep the relationship with your mentors because you can never know what they can do for you and the influence they can have in your life.