Our local partners — school and community based organizations (CBOs) — know the teens in their communities and what they need to create better lives. The capacity and commitment of these critical partners are top priorities in our decision to start new mentoring labs. We train and support the local staff to run our mentoring labs, creating several part-time jobs at each site and spreading technology literacy and management skills to community residents.

Nkosi’s Haven is a pioneer HIV/AIDS NGO.  Started in 1999, it was one of the first organisations to address South Africa’s orphan crisis.  Located in the south of Johannesburg, Nkosi’s Haven offers holistic care and support for destitute HIV/AIDS infected mothers, her children, and resulting AIDS orphans (infected or not). Nkosi’s Haven is named after Nkosi Johnson, the young AIDS activist who passed away on International Children’s Day on June 1st 2001, who dearly wanted a facility that would care for struggling mothers and their children. He had been separated from his mom because of the HIV diagnosis and he never wanted that to happen to any other child. He also wanted HIV positive people to be cared for without discrimination or prejudice. Nkosi’s Haven was Infinite Family’s very first CBO partner in South Africa. Visit the Nkosi’s Haven website here. 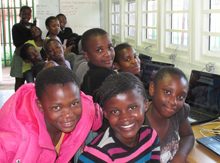 The Alexandra Child Care and Support Centre, is a community based organization located at Realogile High School in the Alexandra Township on the northside of Johannesburg. ACCSC provides daily child care so that teens may drop off their younger siblings and attend school, and a mid-day meal to all children who come to the centre after school. ACCSC manages Infinite Family’s first LaunchPad mentoring lab.

Velokhaya Life Cycling Academy is a not-for-profit organisation based in Khayelitsha, Cape Town. Velokhaya uses cycling-based programs to involve township youth in a positive, after-school activity. They chose the sport of cycling because it was a sport which township children wanted to participate in – and one which, until the formation of the Academy, had excluded a large percentage of South Africa’s population. Visit the Velokhaya website here.