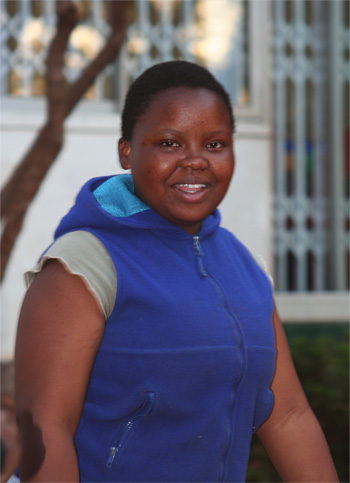 “The Spirit of a Fighter”

Patricia’s mother passed away in 2002 when she was only 7 years old. She was raised by her sisters in a child-headed home. Three years later, the three youngest were moved to a group home. Patricia’s mother had been the pillar of the family. When she died, she left a huge hole in the fabric of Patricia’s family life.

Patricia’s older sister quit school at 19 to take care of them and they did their best to be there for each other, but ‘children taking care of children’ is never enough. All the same, Patricia remembers her sisters as taking good care of her.  Having been so young at the time, she has good memories.

In school, Patricia life was no easier. Her English teacher told her that she “was a nobody”, that she “was not going to make it in life”, that she was a “fool”. Patricia could not take the daily abuse and wanted to give up. She remembers, “I just wanted to die. I never wanted to be in this world.” Thankfully, she turned to her mentor who helped her to see that things would get better and that her struggles today were not worth dying over. Patricia’s mentor encouraged her and brought out the spirit of a fighter – a spirit that had always been there but just needed nurturing.

When Patricia graduated high school, she had no money to pursue higher education and her scores were not good enough for scholarships or a bursary. To make matters worse, she also had trouble securing a job. The words of her teacher telling her she was a nothing and would never amount to anything haunted her. She sunk into a deep depression. Even dragging herself to the weekly online meetings with her mentor was difficult, but they ultimately saved her life. Patricia’s mentor never let her give up on herself. The knowledge that she has someone on the other side of the world, who believes in her and cares whether she lives or dies, has helped carry Patricia through the darkest periods of her life.

Patricia has been with the Infinite Family program for the last 10 years.  She describes her experience as “amazing”. Through the mentorship, her English language skills have improved dramatically, her self-esteem got better and her school marks went gone up. While working with Infinite Family, Patricia has acquired computer skills, the ability to speak confidently with people of diverse backgrounds and has received help dealing with her depression. She understands how important it is to be a part of a community and not to isolate herself during times of struggles. She has learnt from her mentor to be strong, to be herself, to be proud of herself and what she is trying to accomplish in life. She feels like she has finally come out of her shell.

Now, she is working part-time with Infinite Family as a Monitoring and Evaluation Associate while she completes a Learnership (internship) in Auxiliary Social Work.  She only made it this far because of her inner strength and the support she received from her Infinite Family mentor.

When asked, Patricia struggles to put the value of Infinite Family’s mentoring program into words. For her, the program is valuable beyond words.  Through it, she has found hope and many new opportunities. After she completes her Learnership as an Auxiliary Social Worker, she wants to secure a scholarship to study for a Degree in Social Work and Psychology.

Now poised, thoughtful and self-confident, Patricia’s long term goal is to work for the South African government and serve her home township, Orange Farm, by helping to get rid of the stigma that surrounds HIV and AIDS, and lower high pregnancy rates and the number of child-headed homes. She believes her life experiences have led her to this work and she very determined to fulfill this calling. Through her mentor, she has learned that trying and failing are just part of the life long journey and that she cannot give up on her dreams.

The advice she would give to her younger self is, “Go for it; join the Infinite Family program as soon as you can! It will be the greatest decision you could make in your life.”