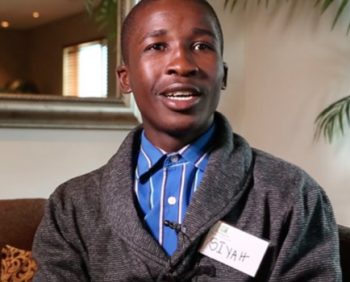 Siyabonga, also known as ‘Siya’, has come a long way from where he began. He grew up in a single parent household with his mother, who worked as a housekeeper, and his two brothers. His lifelong dream is to get a good job so that he is able to provide for his family and so his mother will no longer have to work.

Today, Siya is making that dream a reality. He earned his mechanical engineering degree in November 2015 and is currently working at a learnership (internship) at a Johannesburg-based engineering company to complete his credentials.  In his free time, he mentors teenagers and helps them with their homework.

Below is a story that highlights a typical day in his life, at age 15, when he began as an Infinite Family Net Buddy:

Siya wakes each morning to the grey light of early dawn seeping through the gaps between corrugated metal & cardboard which make up the walls of his home. He rises, dresses in his frayed school uniform and hurries to the open tap in the center of his community. Siya lives with his mother and younger brothers in a squatter camp called Drummond on the outskirts of Johannesburg, South Africa.

School is more than a two mile walk down the side of a busy, paved road. Siya composes poetry as he walks, committing each line to memory with each step; a rhythm for his rhymes. He worries about his upcoming matriculation exams. He struggles with math yet dreams of studying engineering at University. Without the proper books or instruction, he knows that passing the test will be close to impossible. 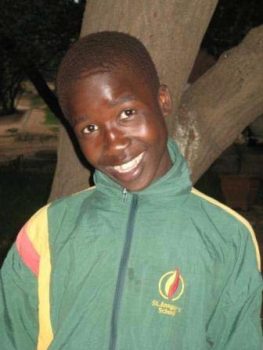 Siyabonga lives on the outskirts of Johannesburg, South Africa.

A chaotic and crowded school day passes and a long walk home awaits him. Siya needs to hurry home to complete his homework and chores before darkness falls, as homework by kerosene lantern leaves him with headaches.

But before he heads home, Siya makes a detour. He navigates his way through a dusty field and across a swinging bridge over a ravine. Then he climbs the steps to a small brick building with a satellite dish atop it. He opens the door to a brightly painted room with computers distributed on desks throughout the room. He hurries to a workstation.

Siya types in the web address of Infinite Family’s Ezomndeni Net. He signs in with his password, checks his email and quickly opens his blog page to add this morning’s carefully memorized poem to his blog. He adjusts the webcam, puts on his headset and writes that same poem on the video chat room’s whiteboard, powered by Adobe Connect, as he anticipates the arrival of his Infinite Family Video Mentor, Chuck.

Soon, Chuck’s face emerges beside Siya’s on the screen. They smile and trip over each other’s words with the eagerness of their greetings. Chuck has found some practice tests for the upcoming graduation exams on a website. Siya efficiently types the web address into the web links dialogue box. He bookmarks the webpage and saves it in a file with his name on it. Chuck praises Siya’s poem and helps him polish the spelling of a few words. They alternate between laughter and furrowed brows as they share the details of their week.

Time flies and their 30 minutes together comes to a close. Siya feels encouraged on his walk home. He feels hopeful about his upcoming exams because his Video Mentor, a man he has only ever seen on a computer screen, is actively advocating for him.

Cars speed past this lanky boy headed back to his shack, one of so many boys … in so many shacks. But this boy knows he is different. This boy knows that a community of caring adults reads his carefully constructed and heartfelt poems. This boy knows that a man who lives in Pittsburgh, PA has his picture on his mantle and spends time each week working to make Siya’s dreams come true…dreams of a future that don’t have him walking home to a shack, but have him entering a University classroom and a whole new world of opportunity.