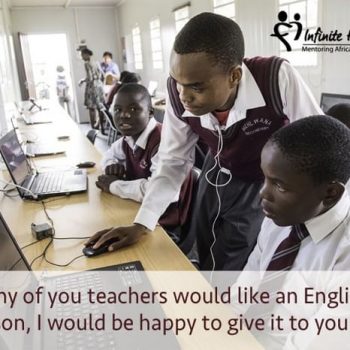 “If any of you educators would like an English lesson, I would be happy to give it to you!”

That’s how Mduduzi ended his short presentation on the difference his Video Mentor, Sharon, had made in his life in the year and a half they had been connected.

He started his presentation by saying that in 8th grade, before starting video conversations (VCs) with Sharon through Infinite Family, he had been a shy and uncertain English speaker. He added that English had been one of his worst subjects but that he struggled with all of subjects that were taught in English, including math and science. Since meeting Sharon, he was proud to report that he was doing better in school overall, especially in English.

To Mduduzi’s surprise, his self-confidence has also increased dramatically and he has become a role model for the younger students who were also struggling. Despite recently losing his father, he is always at the LaunchPad helping the Net Fundis (computer lab managers) and coaching the new Net Buddy mentees.

English, confidence and leadership – Thank you Sharon, nothing can stop Mduduzi now!