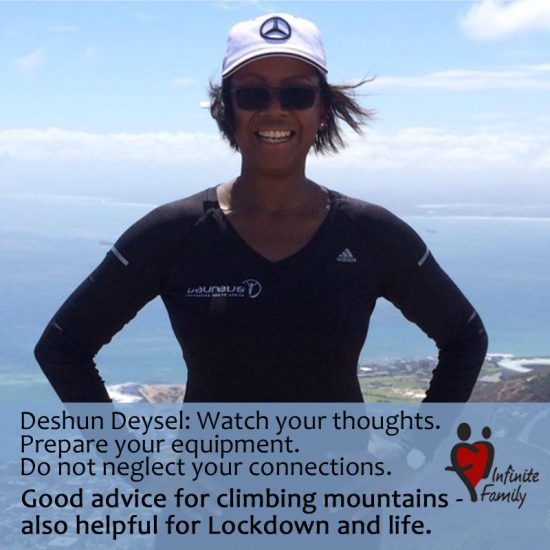 Back in 1996, (before many of you were born and when South Africa’s new democracy was just getting started), schoolteacher (and now entrepreneur) Deshun Deysel found herself on Mount Everest as part of an expedition to plant our national flag on top of the world.  She was the first black South African female ever to try and summit the 8,848 metre peak … and though she had to turn back at 6,500m (which is 700m higher than Kilimanjaro!), her achievement in a historically ‘white’ sport remains an important moment for people of colour everywhere.

In 2003 she went back to the Himalayas, for a second attempt, and this time was unlucky enough to be turned back by a bad storm just 500m from the summit, but Deshun’s love for extreme mountaineering saw her go on to participate in 12 more major expeditions, on five continents, and she’s successfully summitted Kili and Mount Meru (Tanzania), Mount Kenya (Kenya), Mount Elbrus (Russia), Mount Kala Pathar (Nepal) and Mont Blanc (France).

Unsurprisingly, Mount Everest kept beckoning Deshun over the years and 2020 was supposed to be the year she returned for her third attempt, as part of an all-female team of entrepreneurs, to show just how far (and high!) South African women have come in business.  However, Covid19 had other plans …

It takes years to plan an expedition to Everest, so it’s been a big blow but Deshun has faced challenges and disappointments before and she’s generous in sharing the lessons she’s learned along the way.  Lockdown is one such challenge and she likens it to what she calls her “Base Camp Moments” which is the time that mountaineers spend at the foot of Mount Everest, planning and preparing for their ascent. (You might not realise it but there’s lots of hanging about, doing nothing, on climbing expeditions because the extreme heights mean we have to let our bodies acclimatize before tackling the climb.  And, because Everest it is so high, it takes forever!)

“Our bodies simply aren’t physically equipped to ascend so high so quickly, so, over a period of weeks, we take several trips up the mountain’s slopes, climbing higher each time,” explains Deshun.  “On the first trip, we make an overnight stop at Camp 1, then climb back down to Base Camp.  Then after a few days of rest, we make a second trip, making a brief stop at Camp 1 before climbing on to Camp 2 for the night, and then return to Base Camp again.  Then, on the third trip, we climb to Camp 3 and overnight there before we go all the way back to Base Camp to wait for a ‘weather window’ when conditions are just right for us to make a summit attempt.”

It’s slow and often tedious but it’s necessary if the mountaineers are to stand any chance of making it to the top (and back down again) in one piece.  So Deshun says she developed her own way of coping with the impatience of Base Camp Moments and, interestingly, she’s finding them a helpful way of coping with lockdown too.  Here they are:

Strange as it seems, Deshun says the one thing she didn’t let herself think about in Base Camp was the mountain.  Weird, she admits, since her whole purpose was to climb it!  However, she says it was just too overwhelming and mentally exhausting to let every moment be consumed with the climb while she was forced to sit around waiting for the time to be right.  (Helloooo!  What does this sound like to you, NetBuddies?)  So, instead of thinking about the enormous rocky challenge outside her tent window, she focused on self-care and did other pleasurable things (like write letters, read books, listen to music) that helped her relax.  (Sounds good!)

As with every sport, equipment is key, and performance depends on it being it good working order.  For mountaineers that means their ropes, harnesses and – most importantly – crampons need to be in excellent condition.  (They’re the sharp metal grips they strap to the base of their boots to help them cling on to icy surfaces.)  Deshun’s point is that, when climbers are making their way up an ice-covered slope, their full attention needs to be on what they are doing and not on their equipment.  The down-time at Base Camp is the perfect time to take care of things that needs fixing so that, when the ‘weather window’ opens, they can set straight off and give all their focus to the job that needs to be done.  (Another great parallel with lockdown.  If you get yourself organised now and keep focused on your studies and future goals, when things do eventually ‘normalise’, you’ll be in good shape!)

Sure, you’re part of a team as a mountaineer, and those relationships are really important, but there’s still lots of ‘alone’ time at Base Camp and it can be easy to withdraw and isolate if you’re not careful.  Deshun made it her mission to look after her mental health by staying in touch with family back home and walking around Base Camp to visit other climbing teams, which helped her to stay connected and positive.  (Walking around isn’t an option in lockdown but, please Net Buddies, don’t isolate yourself.  You might find you need some ‘alone’ time, and that’s ok, but it’s important to stay connected with your friends and the people around you.)

One Comment on “There’s more to climbing mountains than reaching the top!”

Thanks for the incredible mention 🌺 💙