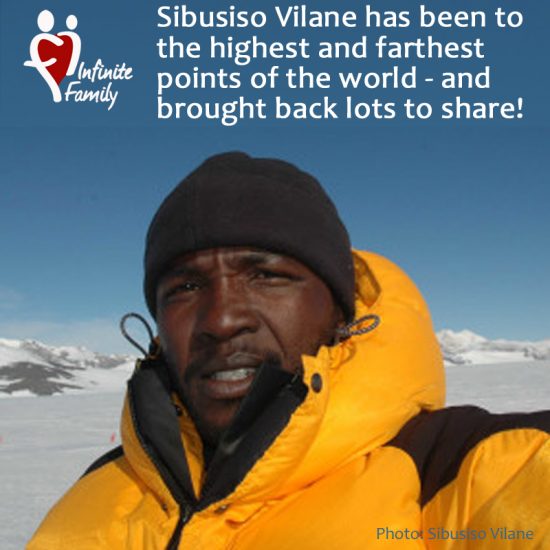 Where were you in 2003?  If you’re in Matric, it’s probably the year you were born and, while you, our little baby Net Buddies, were still figuring out how to breathe on your own, South African mountaineer Sibusiso Vilane was busy becoming the first black person to reach the top of Mount Everest!

Standing on top of the world’s tallest mountain is an experience few humans are ever lucky enough to have and for Sibusiso, who started out as a game ranger in Mpumalanga, it wasn’t something he’d ever dreamed of … until the day someone saw something in him that he hadn’t even seen in himself, and gave him a chance to achieve something truly exceptional.

That someone was John Doble, the British High Commissioner to Swaziland, who loved to hike and invited Sibusiso to go with him for company.  When the diplomat dropped his walking stick down a treacherous cliff face, Sibusiso scrambled down to fetch it and the ease with which he climbed up and down led them to wonder why there were no black mountaineers.  The year was 1996 and, there and then, they decided Sibusiso would be the first black person to summit Everest and that John would help him achieve it.

For Sibusiso, it wasn’t so much about the joy of climbing, it was about his motivation to put Africa on top of the world.  And, incredibly for a guy with no previous mountaineering experience, he did it just seven years later!

And if summiting Everest took him by surprise, what came next surprised him even more.  The week after he got back from the Himalayas, he was invited to meet President Nelson Mandela and it was then he realised the enormity of what he’d done.  “Mandela told me that I’d taken away the Western World’s monopoly to think they are the only ones who can challenge the near impossible.  He said I had set a standard for Africans, to showcase what Africa can achieve, and those words echo in my head every day.”

It was a message that changed the way Sibusiso looked at life, and at himself, and, more importantly, the way he looked at Africans everywhere. “I realised that it wasn’t my climb.  It was about a belief in my continent and in every child out there.  And that it doesn’t matter where you grow up, it’s all about how much you want to get to the top.”

Since his pioneering ascent of Mt. Everest (and his return two years later), Sibusiso has summitted the seven highest peaks in the world, climbed in the Alps, and walked to both the North and South Poles.  So he knows a thing or two about how to deal with extreme weather and deadly conditions … which is useful to share in the time of Covid-19.

If a sporty young game ranger with no mountaineering experience can climb to the top of the world, what can YOU do?  The answer, according to Sibusiso, is anything you want … if you want it enough.  You might not know yet exactly what it is that will light a fire in your soul but, no matter what it is and how challenging it is, believe in yourself, Net Buddies. Nothing is impossible.