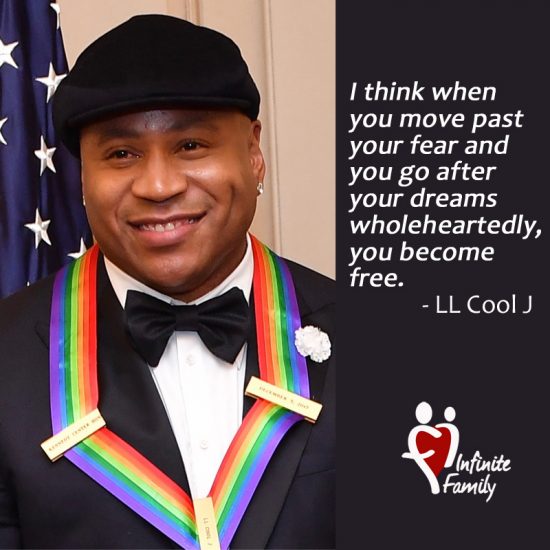 James Todd Smith, better known by his stage name LL Cool J, is one of hip-hop’s early superstars and the first rapper to win the US’ most prestigious arts awards, the Kennedy Center Honors, amongst numerous others. His 13 studio albums have multiple hit songs that made it to the top 100 and two Grammy Awards. He is ALSO a record producer, actor, entrepreneur and author from New York. Of his many movies, my personal favorite is Deep Blue Sea, a movie about sharks.

But growing up in Queens, New York wasn’t easy. According to Chicago Tribune, LL Cool J had a heart-breaking childhood. When he was 4 years old, his father shot his mother and grandfather, nearly killing them both. Can you imagine what he went through after finding his mother and grandfather surrounded by blood everywhere – before he was even old enough to go to school? Shortly after this, he found himself bullied and abused by a trusted adult that went on for years before his mother realized and put a stop to it.

LL Cool J began rapping at the age of 9, and by the time he was 16 years old, he was creating demo tapes of his music. When he was 17, he was signed to Def Jam and released his first studio single. After years of recording his own music at home, his debut single paid off and sold over 100,000 copies.

A common trend we keep seeing in all the successful individuals we are reading about, is that success does not happen overnight. The people we have reviewed all come from different walks of life, but a common trend is they are all hard workers and push until they are the best at what they do. Success does not come from doing the minimal amount of work, but with passion, focus, and never giving up results in success. If you have a dream, or a passion, follow it and make it your everything. One powerful LL Cool J quote says, “Dreams don’t have deadlines. I’m thinking of doing bigger and better things and having more fun with it.” This is the attitude we all need to apply to our daily lives.