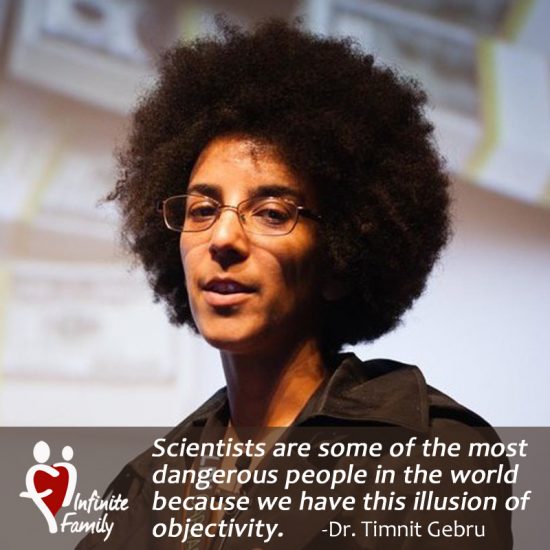 Timnit, is a Research Scientist in the Ethical AI Team at Google and also Cofounder of Black in AI. She was born and raised in Ethiopia. Timnit has given TED Talks on how to stop artificial intelligence from marginalizing and understanding the limitations of AI. Her company Black in AI is a multi-institutional, transcontinental initiative creating space for sharing ideas, fostering collaboration, and discussing initiatives to increase the presence of Black individuals in the field of AI.

Timnit grew tired of being the only Black person in a large pool of engineers at the AI tech conferences she attended around the world. She is an advocate for inspiring Black youth to join her in the tech world. In an interview with WEALTH magazine, she explained how there was a lack of Black Women in AI even when she worked for Apple. In the conferences she went to, Black Women where under represented, and Timnit wanted to change that. In 2016, after a rant on Facebook following another experience at a nondiverse tech conference, Timnit established a private group on Facebook to connect Black people working in AI, and a few hundred people asked to join the group. The following year that’s when she founded Black in AI (BAI). Since then, her organization has taken off. She has gathered a group of engineers and researchers from around the world. Each year, Timnit and her team have been able to provide travel grants through corporate sponsorships. For anyone interested in a career in research, engineering, and AI, I encourage you to watch her TED Talks on YouTube.   – Andrew Johns, Net Blazer

I need a proof as a member of Black in AI (BAI) to afford me opportunity to acess application fee waiver for PhD application materials at the Computer Science department at the University of Colorado Boulder.
The below is my email to school admsion desk officer and their response

I am Serifat Folorunso, a member of Black in AI (BAI) and Women in Machine Learning.
I need to apply for an Application Waiver for my PhD application materials at the Computer Science department at the University of Colorado Boulder.
I reside in Nigeria and I have completed my PhD in Statistics but my interest is now on Artificial Intelligence: Machine Learning and to be an expert in theory of computing.
I want to start my application but i need a waiver
Regards

Thank you for your interest in CU Boulder. As a member of Black in AI (BAI), I believe you receive a fee waiver but it would be the Graduate School that would manage that process.

If you are affiliated with one of these programs, please send proof of your affiliation to gradadm@colorado.edu before you submit your application, and the university will process your fee waiver for you.

I hope this helps!