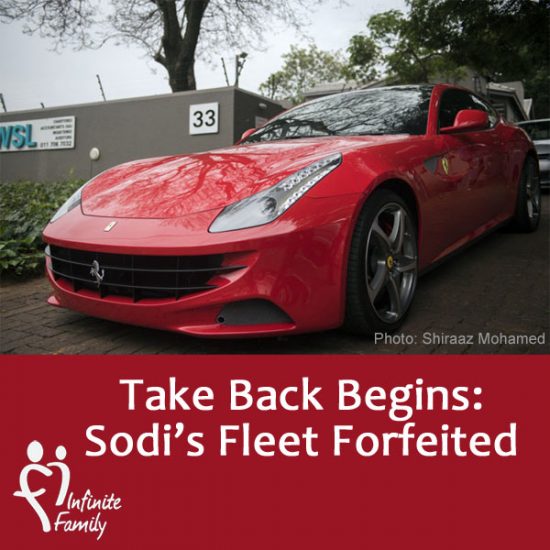 A 2017 red Ferrari Four F151, valued at R2.99-million, pulled out of Blackhead Consulting’s headquarters in Bryanston, Johannesburg, on Tuesday, the driver opening the throttle one last time before the car goes into storage.

The Ferrari was one of the vehicles the National Prosecuting Authority’s (NPA’s) Asset Forfeiture Unit (AFU) seized from politically connected businessman Edwin Sodi and his company Blackhead Consulting, after he and six others were in court last week for fleecing the Free State government of R255-million through an allegedly corrupt asbestos audit contract.

The AFU obtained a provisional restraint order against Sodi and his co-accused, allowing it to seize around R300-million in assets. On Friday, the AFU swooped on Sodi’s Johannesburg home as well as former Free State human settlements MEC Sarah “Olly” Mlamleli’s Bloemfontein property.

They have been charged with fraud, theft, corruption and money laundering in relation to an irregular contract awarded in 2014 to Blackhead Consulting and Diamond Hill Trading to identify and remove asbestos from Free State homes.

The deal was worth R255-million, although only R21-million worth of work was carried out. The Auditor-General raised the issue of the illegal contract in 2015 after R91-million had already been paid.

Instead of taking action, provincial officials allowed the deal to continue and the government paid the companies a further R139-million. Sodi has gone to court to claim another R25-million he believes he is owed.

Sodi is accused of paying kickbacks to government officials to secure the deal, something he recently dismissed when he appeared at the State Capture Commission of Inquiry.

The high-flying businessman, whose company earned over R1-billion in state contracts in the last decade, has also made generous donations to the ANC and some of its leaders.

The AFU’s provisional restraint order provides some detail of his luxurious life. He owns multiple properties, and vehicles registered in Sodi’s name include a Porsche Cayenne, a Rolls-Royce Ghost and a Bentley Continental

The AFU and curator Gerhard Geldenhuys from PwC were busy on Tuesday seizing Blackhead Consulting’s 25 vehicles, which include the Ferrari, a Porsche and another Bentley Continental, plus several Mercedes’ and Ford Rangers.

According to News24, Sodi recently listed his seven-bedroom Bryanston home on the market for a whopping R85-million.

The NPA and various law enforcement agencies continue to investigate the asbestos deal and more arrests are expected. The accused are due back in court on 11 November.

Have you ever heard of Edwin Sodi before?

Was he someone you looked up to before he was arrested?

Why did you think he was so successful?

Do you still think he is successful? Why or why not?

The wheels of justice sometimes turn slowly, but thanks to brave people who work for the press and government, they continue to turn.

Let us know what you think about this news by answering the questions above and getting them back to the team at Infinite Family.