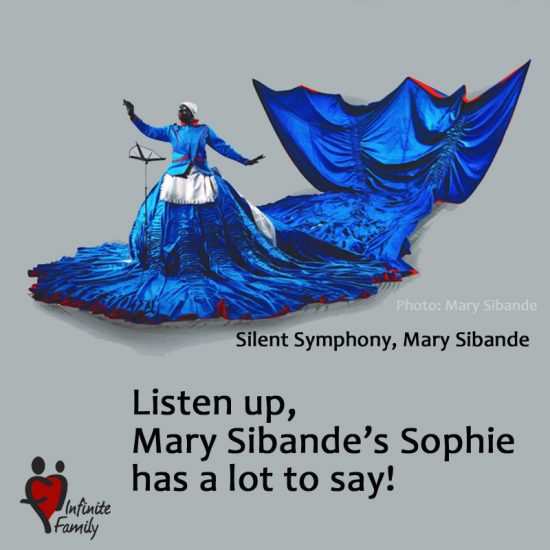 Like many South African children born in the 1980’s, Mary Sibande (born April 11, 1982) was raised by her grandmother in a small village in Mpumalanga while her mother was employed as a domestic worker in Johannesburg.  Apartheid was still in full force so they didn’t see each other very often. Mary’s father was in the South African army  keeping him away. She only spent time with him later during her teenage years.

A celebrated artist today, Mary is known for her very elaborate and beautiful sculptures, paintings and photography, often portraying her alter-ego, Sophie. You might have seen Sophie in larger than life images through Johannesburg during the Fifa World Cup in 2010 wearing a rich blue Victorian dress accompanied by a stark white apron and doek. Sophie represents the mix of experiences, during apartheid of Mary and her mother, and grand-mother. Mary uses Sophie to honor the domestic work of her mother and grand-mother, to expose stereotypes of black women in South Africa, to give voices to the voiceless, and explore today’s culture and power dynamics. Despite shining a bright light on painful topics, it’s impossible to look away from Mary’s Sophie. As her grandmother once said, “this is amazing what you are doing, taking this ugly history and making it into these beautiful objects.” While the small town where she grew up, Barberton, did not have a single museum, her work is now collected by major institutions worldwide.

Here’s something for us all to think about:  Sophie is always larger than life and her eyes are always closed.  Why do you think that is?