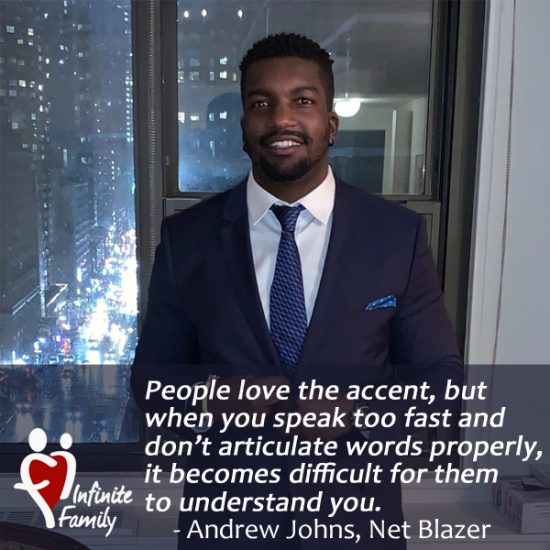 I’ve always considered myself a native English speaker, but 5 years ago when I moved to the United States for college I struggled a bit. I spoke English growing up as each of my parents spoke a different language, thus, English was the common language used. While in South Africa, it was easy for others to understand me since we all speak multiple languages and as a result are familiar with various accents. An example of this would be when I would speak to friends, I would speak in Zulu, English, and Sesotho all in one conversation. This is the norm in South Africa.

My struggles began when I could only speak English every day here in America. If I didn’t know the English word for something, I wasn’t able to replace it with the Zulu word. This wasn’t even the biggest challenge because there were only a few words I wasn’t able to translate. My accent posed a bigger challenge for me as it initially made me more hesitant to participate in classes as actively as I could have. I spoke much faster with an accent so I was always being asked to repeat myself. This made me feel self-conscious. Imagine talking to a person you were interested in and they asked you to keep repeating yourself, this was my experience. At that point, I decided I would do something to improve my speaking. I began to speak much slower, enunciating and pronouncing my words properly, which helped. Side note, people love the accent but when you speak too fast and don’t articulate words properly, it becomes difficult for them to understand you.

Finally, I ended up taking many English grammar classes because my writing didn’t correspond well with my speaking. If you aren’t able to write properly, it will affect how you communicate with professors and your future bosses. We’re all lucky to have Infinite Family. My Video Mentor helped me overcome some of these challenges growing up. And now, one of the Video Mentors obtained these short and funny English story links to help us all. I challenge you all to listen to all of the English stories here first – in one week or less! We will be waiting to hear what your top 3 favorites are by next weekend – so don’t forget to tell us before you move on to stories in other languages.