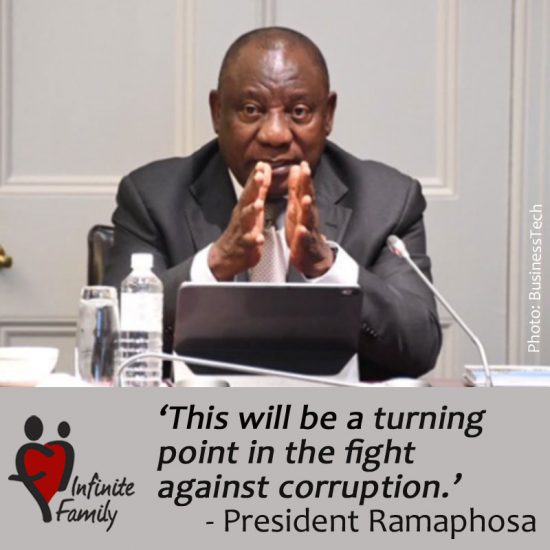 Excerpts from: Ramaphosa in a show of force: ‘This will be a turning point in the fight against corruption,’ BusinessTech, August 21, 2020

Bloomberg reported that Ramaphosa gained the upper hand in a power struggle in the nation’s deeply divided ruling party after surviving a bid to force him out of office, clearing the way for him to overhaul his cabinet.

In his online address, Ramaphosa said the the NEC agreed that the ANC needs to draw a line in the sand between the organisation, and those who steal from the people. He said that the NEC agreed to the points of action that need to be taken.

He said that cadres of the movement, who are formally charged with corruption or other serious crimes, must immediately step aside from all leadership positions in the ANC, or other government structures.

The president said that cadres caught in acts of corruption, must face the integrity commission, to explain themselves. Those who do not give an acceptable explaination, may be suspended. Those convicted, must resign from leadership positions, and face disciplinary actions.

No high-profile politicians have been convicted in connection with the theft of more than R500 billion ($30 billion) from the state during former president Jacob Zuma’s rule.

“That is the work that needs to come to fruition in the next month,” she told the paper. “We are unbelievably close” to making arrests, Cronje said.

This article and several others about what happened over the weekend and ‘behind the scenes’ ever since President Ramaphosa took office has given Infinite Family staff both inspiration and hope.

It is impressive that neither the Covid-19 pandemic or a “choreographed campaign” against him has stopped President Ramaphosa. Two important take-aways from this story are:

Your turn: What do you think about all of this?

What emotions did you feel when you read this article?

Does it make you think differently about the leadership of South Africa right now?

What do you think will happen next?

Please don’t keep us waiting – we really want to hear what you have to say about these major events!

I think President Ramaphosa is doing a great job because some leaders have been stealing the money from the government and action was not taken.I feel happy because President is reall doing a great job.
Yes because other President have not done a great job like Mr Ramaphosa.
I think SA will be success and be a greater country too.

It’s clear you carefully read and understood the article. Your answers are thoughtful and on topic. Below, I have rewritten your responses with some small changes. See if you notice what I have changed to fit your answers into more standard written English.

I think President Ramaphosa is doing a great job because some leaders have been stealing the money from the government and action was not taken.
I feel happy because the president is really doing a great job.
Yes, because other presidents have not done a great job like Mr. Ramaphosa.
I think South Africa will be a success and be a greater country, too.

Again, nice work on your responses. For next time, see if you can write more than one sentence for your answers. I can tell you have more to say, and readers would love to hear your ideas.