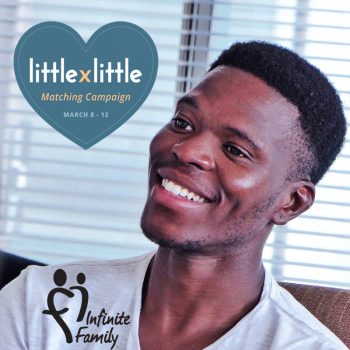 The persistence of young South Africans like Langa should be an inspiration far outside of his community. Like many young people, life events interrupted his education but haven’t interrupted his becoming a self-reliant, responsible young man. Raised in a single-parent home with five siblings, he worked hard in school and did well. In doing so, he went against a strong current of criticism from adults throughout the community including comments like, “Why do you stay in school,” and “Don’t tell me about school. That thing doesn’t help. It won’t help you.” It was his Video Mentor, @JoanFischer living in New Jersey, that strengthened his resolve and carried him through. At our LaunchPad, we could see how responsible he was, even at such a young age, and offered him a position as Junior Net Fundi, a role model for his peers.

But ‘life’ intervened. Right in the middle of his 12th grade final exams (aka the matric), he was forced to miss the last test to help his family through life-threatening difficulties. Without his matric qualifications, his dream of attending college was shattered. But there was no time for tears. Langa managed one temporary job after another, always distinguishing himself, but always ending up in the same place and needing to start over when the job ended. He started a college course in Business Administration but had to drop out when he also lost his mother and a brother who helped support the household. Today he works in a low-wage job without benefits that supports his own daughter and helps with household expenses for his siblings.

Langa is just one example of the many young adults working hard to support themselves and many family members. A flexible opportunity, like access to a computer and the internet on Saturdays would allow him to finish his college studies and apply his resilience, resourcefulness and responsibility in a job that helps him achieve stability and security. Today is the last day the GlobalGiving will match your gift to help Phillip complete his studies and get a job that lifts his whole family out of poverty! If you can, please make a gift to bring online education to our teens wo they can continue taking charge of their lives. Thank you.