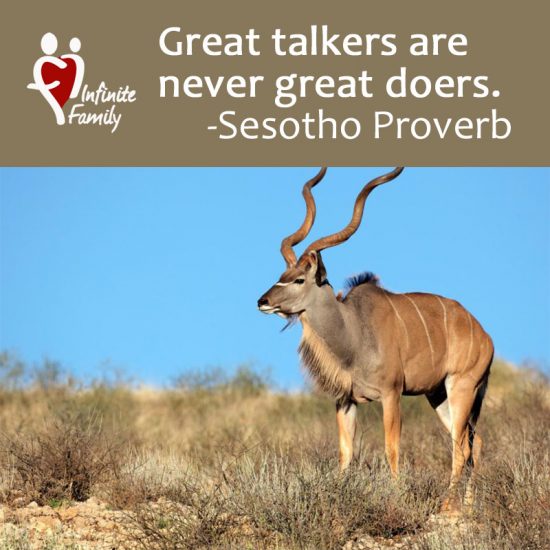 Kudu bulls are tall and majestic with the most spectacular horns. With their hearing being so well developed, the kudu’s large ears allow it to hear danger when it is in the thickets, thus avoiding predators. When disturbed, a kudu will usually stop, sweep its large radar ears from side to side and listen to assess the situation and then move away quietly or dash off after giving a loud, sharp alarm bark.

Are you a good listener or are you speaking more than you are listening? Being listened to and heard is one of the greatest desires of the human heart. The most basic and powerful way to connect to another person is to listen and it is the key to all effective communication and the builder of trust. Listening means hearing and understanding with an open mind what is being said without formulating answers or interrupting. People who know little say much, people who know much say little. Many of us don’t listen as well as we should and we never listen when we are eager to speak. Listening is a magnetic and strange thing, a
creative force. The friends who listen to us are the ones we move toward. Unlike your mouth, your ears will never get you in trouble.

Always listen intently like the kudu because the beginning of wisdom is silence, the second stage is listening. To appear wise, one must talk; to be wise, one must listen. Be a good listener because unlike your mouth, your ears will never get you into trouble. One of the most sincere forms of respect is actually listening to what another has to say. – Bryant H McGill

There’s another saying – we were given two ears but only one mouth so we should listen twice as much as talking.

What is the main idea in this essay about kudus?

What do you think about this idea?

Does you think we can really learn things from animals?

Who do you know that acts like a kudu and why?

The way to make sure you have really heard something is repeat it back to someone else in your own words. You can do the same thing by typing your answers here – we can’t wait to read them.</p>