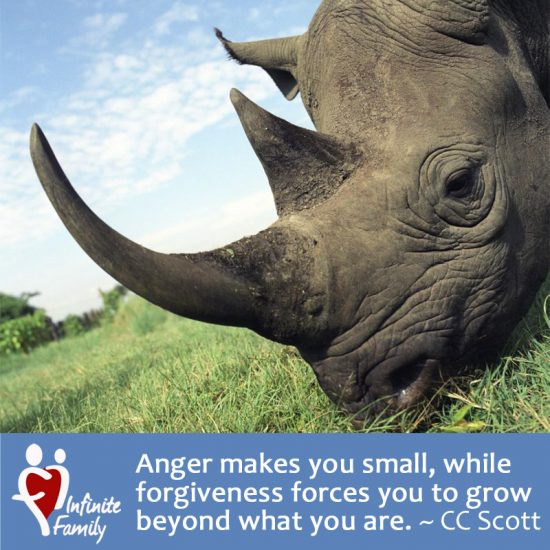 Rhinos are extremely aggressive and charge readily at perceived threats. Rhinos will fight each other, and they have the highest rates of mortal combat recorded for any mammal: about 50% of males and 30% of females die from combat- related injuries. Anger management is a huge problem for the rhino!

Anger is one of the most common and destructive delusions, and it distresses our minds almost every day. For every minute you are angry you lose sixty seconds of happiness! Holding onto anger is like grasping a hot coal with the intent to throw it at someone else; you are the one who gets burnt. When you are angry, you are more likely to miss opportunities, make mistakes and take actions that you may later regret.

An angry person is always full of poison and negative thoughts and it brings out a lot of negative energy. People who lose their temper regularly like the rhino will always be in a stressful situation. The key to a healthy body is a calm head.

Don’t do something stupid just because you are temporarily upset. When a man is stung by a bee, he doesn’t set off to destroy all beehives. You need to control anger before it controls you! Anger that is out of control will drive away those we love the most and endanger our daily existence.

According to Bruce Lee a quick temper will make a fool of you soon enough, thus take charge!

If 50% of male rhinos and 30% of female rhinos die from combat – what total percentage of rhinos are killed in battle?

How do you feel about so many rhinos dying from fighting?

What do you think of the metaphor that holding on to anger is like grasping a hot coal?

Will you share this information with anyone you know?

Do you know what? Another way to manage anger is to write about it, or anything else! So, use the reading today to vent about something else that makes you angry, or just answer the questions above. Either way, we want to hear what you are thinking about rhinos and their anger management problems!